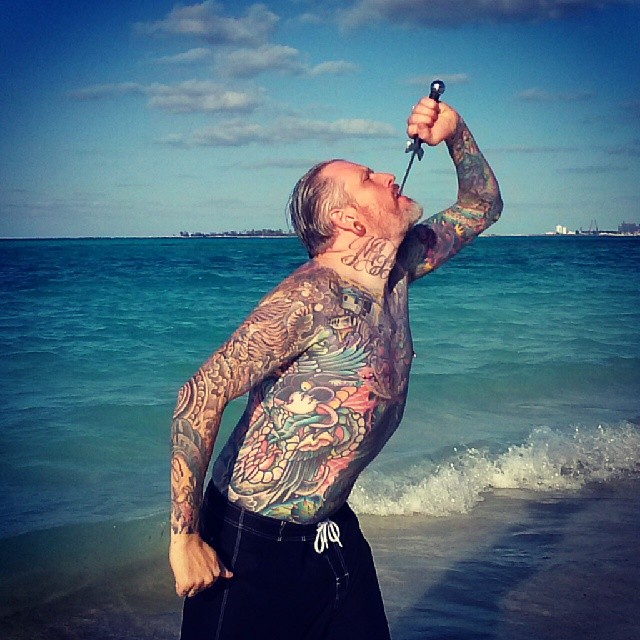 So you want to be a sword swallower, huh? You think you have what it takes. You are ready for a life of SHOCK and AMAZEMENT. Your friends will think you’re cool and you could be THE next big reality star. Sounds pretty great, huh?

Ever since a young girl was shown on television shoving a coat hanger down her throat, I have been getting a few emails a week from individuals asking me to either give advice or teach them the ways of sword swallowing. The crazy thing is, 75%+ are teenage girls who have never even seen a live sword swallower.

As of today, I have never taught anyone the art of sword swallowing. Well, exceptMaybelle on a few occasions, but it didn’t take very long before she decided it wasn’t for her. I guess my reasoning has a lot to do with my other career, body piercing. That’s right. I have been a professional bodypiercer for over 20 years. That being said, I have worked in a tattoo shop for 20 years. That industry lives by a different code than most. People are brought into the business generally through apprenticeship or as a shop grunt, doing whatever is told of them in hopes of getting their foot in the door of a very tight-knit community. Once you brought someone in the industry, you were held responsible by the remainder of the community for their actions. So people were very reluctant to let just anyone in. Of course, times have changed in that industry. However,

my thought process has not.

I am still able to help someone out who is thinking about the life of a sword swallowing sideshow performer. The first thing I ask is “Are you willing to die for it?” Sword swallowing is one of the most dangerous stunts to perform and even very skilled sword swallowers get hurt and, quite possibly, killed. You must know that going into it.

Also, sword swallowing is just a tool in the toolbox. How do you plan on using that tool? Do you want to be a street performer, stage performer, clown, motivational speaker, or magician? You see, there is a lot more to being an entertainer than just the physical ability to do a stunt. People ask me what the hardest thing I do on stage is, and I always say “talking on the microphone”. Carrying a show is by far the hardest thing I do. If you just get up there and swallow a sword, you are just another episode of Jackass. People have all seen someone do something dangerous for the shock and entertainment of others. Now, what are you going to do to get them to stay around, tip or maybe even hire you for your skill?

So here is my advice. Find out what you want to do and work on that first. See what it feels like to be on stage, book shows, sleep in cars, bomb on stage, get destroyed by a heckler, spend your last dollar to get to a gig and show up to an empty venue, deal with a drunk club owner to get your pay, break down on the side of a road while your fans are awaiting your arrival… I could go on for hours. Then see if it is for you.

It takes a lot more than swallowing swords to be a success. It takes an entire toolbox full of stunts along with the ability to sell it to others. It takes writing a routine (not stealing one on YouTube from another entertainer) and performing it enough to perfect delivery, timing and to make it yours. Once you have done that, then talk to someone about teaching you their craft. Go to one of the few Sideshow Schools in the country and prove you are worthy of walking the path so many great entertainers have paved. Bring something positive to the industry. Don’t be another half-assed performer giving others a bad name. And remember …be humble.

It’s always interesting to us how the stunts we perform affect people so differently. We see every emotional reaction there is… and then some. Chime in and let us know which stunt really gets you green!